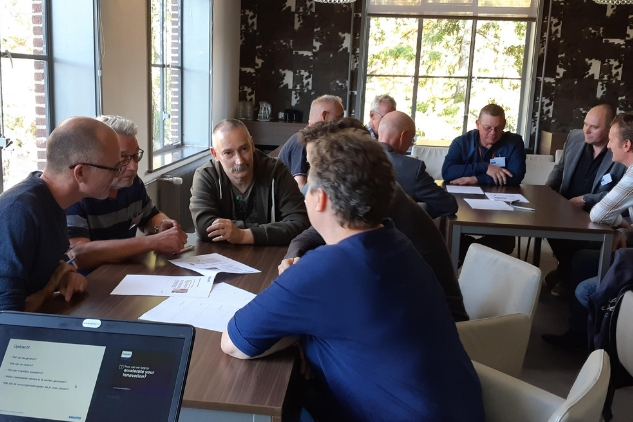 On 11 October 2018 it was time again for the annual Health and Saftey seminar of the Radiation Protection Group (RPG) of Environment, Health and Safety key area of expertise at Philips Engineering Solutions. This time it was held at the Kapellerput in Heeze.

There were two attention points addressed in the seminar which appealed to many organizations:

Given the large number of participants from different organizations and industries, it turned out that the changes and the related questions and ambiguities covered the entire field of radiation applications.

Peter Görts spoke about the practical implementation of new legislation and regulations. He explained what was new and what changed in the new legislation.

Another important point was the system of radiation protection experts/officers and related training. The training courses for Radiation Protection Officer (RPO (in Dutch TMS: Toezichthoudend Medewerker Stralingsbescherming)) are divided into 9 application areas, namely 3 medical, 1 nuclear and 5 industrial ones.

Supervision and investigation of ionizing radiation

Then it was Hugo Visser (Inspectie SZW) who spoke about the supervision and investigation tasks. Supervision of proper application of ionizing radiation in the Netherlands is carried out by a special KEW team consisting of three persons. All three persons were present and briefly introduced. Supervision of correct application of ionizing radiation is done on the basis of the Nuclear Energy Act and the Working Conditions Act.

In the informative presentation it became clear which activities were carried out by the Inspectie SZW, which tools are available to them and which inspection projects will be carried out in the coming year.

Deal with incidents at an NDT company

The last speaker before lunch was Paul van Rooijen (radiation protection expert at Vinçotte Nederland B.V.) who spoke about how to deal with incidents at an NDT company.

The conditions in which they work are often heavy, both indoors and outdoors. Usually it is dark or the space and visibility are limited. Another aspect is that the source is small, but dangerous.

Paul van Rooijen explained that in order to harmonize the working methods and to minimize the impact of incidents, a practical guideline for Industrial Radiography is being drawn up.

Finally, an incident was described that took place in a refinery. This showed that good communication between the client, ANVS and contractor was necessary to bring the incident to a satisfactory conclusion.

Then it was time for the lunch where the social contacts were again strengthened and where there were good discussions between the participants and the speakers about the topics that had been discussed in the morning.

Incident organization of ionizing radiation in the Netherlands

In an informative and very entertaining way Thorsten managed to inform the participants very well on this subject.

The working method, the timeline and the deployment of emergency services in the event of an accident with radioactive substances were explained in detail.

After the presentations, workshops were held by PES-RPG employees on the topic of incident control. The starting point of the workshops during the radiation protection seminar was to think about how companies should prepare for emergency situations.

After reviewing a number of relevant legislative articles relating to emergency situations, from both the Health and Safety Act and the Basic Safety Standards Radiation Protection Decree, three practical situations were presented to the groups. These included different types of companies that deal with substances that emit ionizing radiation.

There was a good discussion among the participants and they listened to each other very well.

After the workshops and the plenary feedback, the formal part of the day was concluded by Willy Enzing. The informal part was continued with a snack and a drink.

All in all it was again a very fruitful day where everyone had a very positive contribution.

Read more about services from the Environment, Health & Safety key area of expertise: