MEMS in healthcare in 2023 and beyond; six promising application areas 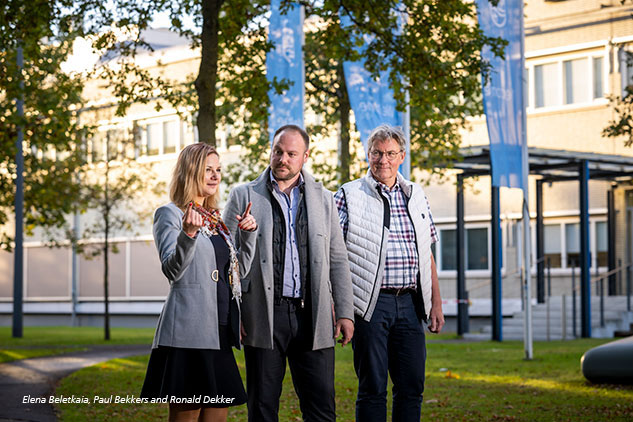 The healthcare industry is facing several challenges, on a global scale. Two of the most pressing ones, which are interdependent: populations are aging and the cost of healthcare is increasing.

In reply, healthcare is transitioning in several ways. Patients are treated in their home environments as much as possible – a trend that was accelerated during the pandemic. Also, patients are more than ever empowered to understand and improve the condition of their own health thanks to wearable devices and online information. Personalization offers opportunities to tailor therapies to individual patients. Finally, the efficiency of healthcare is stimulated by the transition to pay for cure, rather than pay for treatment.[1]

Paradoxically, these four solution paths to solve the macro societal challenges in healthcare are enabled technically at a micro-level. Several technological developments on submillimeter level offer a roadmap away from a global healthcare infarct. Some of these solutions are implemented in micro-electronic mechanical systems (MEMS) that have been around for some years, or even decades. In some application areas MEMS are expected to fulfill their promise already in the coming years.

CMUT in point of care

Since its introduction in the 1950s, ultrasound has been a widely used diagnostic technology. In recent years, portable ultrasound equipment has made ultrasound more readily available in point of care settings.[2]

“Now, we are at the brink of a revolution in ultrasound monitoring and imaging,” says Ronald Dekker, Senior Research Scientist at Philips. “With MEMS technology we will be able to manufacture ultrasound transducers at a large scale, with high quality. This allows a larger group of users to capture 3D images. Combining those data with AI brings tremendous opportunities.

“We are at the brink of a revolution in ultrasound monitoring and imaging. With MEMS technology we will be able to manufacture ultrasound transducers at a large scale, with high quality. This allows a larger group of users to capture 3D images. Combining those data with AI brings tremendous opportunities.”

Take fetal scanning for example. The combination of AI and 3D imaging is making it easier to make meaningful images, bringing ultrasound out of the hospital into the hands of first line care givers, and in the end perhaps even laymen. With a MEMS-based ultrasound transducer in an intelligent system, an image can be gathered even if the probe is not positioned exactly near the fetus. Moreover, you don’t need to have a medical background to get relevant clinical information from the image; AI can assist in measuring volumes, for example, and assess the health of the fetus based on what it sees. The same goes for bladders: their condition can be perfectly assessed by ultrasound, combined with a clever AI algorithm.”

Paul Bekkers, Business Development Manager, adds: “Until now, ultrasound has been bound to hospitals and ultrasound experts. MEMS technology is going to bring ultrasound diagnostics and monitoring to point of care, like general practitioners, physiotherapists, and midwives.”

Especially capacitive micromachined ultrasonic transducers (CMUT) have the potential to fuel this revolution in ultrasound. “These transducers are relatively cost effective, easy to manufacture and, above all, scalable,” says Paul.

This opens another new door: including MEMS ultrasound in wearable devices, such as sensors or smart watches. Paul: “The first clinical application is expected in the intensive care, where ultrasound transducers can be used to measure hemodynamics, cardiac output and moisture balance. Second, CMUT technology can be used for lung monitoring during ventilation, to make sure that healthy lung tissue will not be damaged.

Currently, ICU professionals often must rely on their own observations to assess the status of a patient. Ultrasound can help them to measure, and thus be more certain about what is happening.” 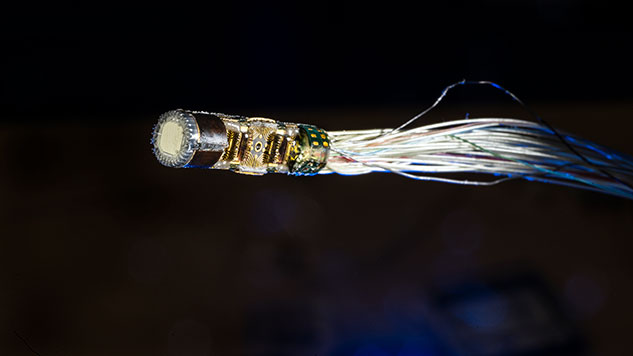 We are just starting to see the opportunities of CMUT, Paul concludes: “A patient with incontinence can wear a sensor that gives a warning when it is time to visit the bathroom. CMUT can be used for hemodialysis vascular access monitoring, to reduce complications. There are many application areas that we simply never considered before, because ultrasound was only available in carts that are bulky and costly to produce. You can only imagine what the future will bring if ultrasound is included in smartwatches or smartphones.”

“There are many application areas that we simply never considered before, because ultrasound was only available in carts that are bulky and costly to produce. You can only imagine what the future will bring if ultrasound is included in smartwatches or smartphones.”

One of the major challenges in developing new medicines is the availability of reliable and accurate test models at the early stage. Testing on animals is the current standard, but decreasingly so. Not just because of its impact on animal welfare, but also because tests on animals do not always yield results that are representative for humans.

“An organ-on-a-cell is a group of cells that is the smallest possible representation of an organ,” says Ronald. “You can use it in an environment that replicates, as carefully as possible, the relevant physical and physiological parameters in the body – like a heart that contracts periodically or lungs that expand. This way, you have a near-human alternative model for developing and testing medicine and toxicity screening.”

Organ-on-chip technology also offers a solution for orphan diseases, that are so rare that there are simply not enough patients available for tests.

The idea has been around for quite some years, even decades, but it seems that the momentum is here. Elena Beletkaia, Business Development Manager at Philips: “It is getting more and more traction, because the technology is reaching its maturity, where it is becoming more compatible with the current workflows and assert its clinical relevance.”

Another promising application field is personalized medicine. Elena: “In chemotherapy, for example, you can use an organ-on-a-chip to test how the therapy will affect the tumor, but also the rest of the body and adjust the treatment protocol accordingly. The next step, which some organizations are already working on, is combining two or more organs on a single chip.”

“In chemotherapy, for example, you can use an organ-on-a-chip to test how the therapy will affect the tumor, but also the rest of the body and adjust the treatment protocol accordingly.”

“This field is really emerging,” Ronald adds, “people are still figuring out what the best technologies are. What you see happening now, is a gradual move towards standardization. If we can make that happen, this technology can be applied in larger systems and used by a larger audience. The first organs-on-chips looked like complete lab set-ups, which was too complex for most biologists to work with. Now we are moving towards systems and formats that are much easier to use and to integrate in existing workflows.”

Microfluidic systems process fluids on a micro level; especially sorting cells is a promising MEMS application. Cell sorting can be based on several properties: cell size, electrophysiological parameters or protein interactions. Ronald: “Microfluidics is often part of a larger system, where cells are injected, after which they go through a channel where they recognized optically or with ultrasound and then pushed in one direction or the other, depending on their characteristics.”

Elena: “One very interesting application area is liquid biopsy. It offers an alternative for the traditional, invasive, and often painful biopsies in which a piece of tissue is distracted from a patient’s body. In a liquid biopsy a blood sample of the patient is analyzed to search for cancer cells, for example. And even better; cell sorting can also help in cancer therapy, as part of the immunotherapy solution.”

The possibilities are rapidly expanding because systems technological developments allow for more complexity: “The first generations of microfluidics were still relatively simple,” says Elena, “but now you see more and more complex systems that integrate several functionalities like micropumps, electrodes, heaters, sensors, and system intelligence. And this is where MEMS offers opportunities; especially if you want to take microfluidics into personalized medicine, because then you also need to manipulate or adjust cells somehow.”

“You see more and more complex systems that integrate several functionalities like micropumps, electrodes, heaters, sensors, and system intelligence. This is where MEMS offers opportunities; especially if you want to take microfluidics into personalized medicine, because then you also need to manipulate or adjust cells somehow.”

It has been 22 years since the human genome project was completed, in 2000. The finish line of this project was just the beginning of the exploration of genetics in medicine.

Since then, sequencing technologies have been used to determine the sequences of the whole genome or specific regions. Traditional technologies, like Sanger sequencing, were both expensive and not very fast. Next-generation sequencing (NGS) is a parallel sequencing technology that offers much higher throughput – which makes it faster and more scalable. Massive parallel screening device that can process thousands or even millions of sequences at the same time.

The ‘Sequencing by Synthesis’ approach, where a new DNA strand is synthesized one base at a time, is the most common mechanisms used in NGS. Elena: “There are different ways to detect if a base that is complementary to the target strand was incorporated: fluorescence, luminescence, pH, change in current, and so on. The choice of detection mechanism can define the choice of the material for the consumable. For optical detection, glass is the most suitable choice. Electrical methods for detecting sequencing systems, however, leverage semiconductor technologies. Besides, silicon allows a reproducible and scalable manner of manufacturing of patterned surfaces, nanopores, wells, beads, membranes and other microstructures that are critical for these consumables.”

Advances in DNA sequencing offer huge opportunities; researchers can use genomics to identify the susceptibility to certain diseases, but also improve diagnostics and – again – personalized therapies.

In plain language, a MEMS device is an electronic chip with moving parts. A lab-on-a-chip (LOC) is a MEMS device that can combine a few laboratory functions on a submillimeter integrated chip. The core the LOC is a microfluidic channel, that is often combined with electrical and optical functions enabling fluid mixing, fluid manipulation for (bio)chemical reactions, sample preparation, detection, and a read-out.

While many lab-on-a-chip projects are still in the proof-of-concept stage, it is generally agreed that the technology holds a lot of potential. “There are some really interesting developments going on in the field of electrophysiology,” says Ronald. “Especially in laboratories there is a lot of demand to electronically measure and stimulate groups of cells, like neurons or heart cells.”

Although lab-on-a-chip device can be developed on a paper or polymeric platform, The industrialization of some demanding lab-on-a-chip applications can benefit from the high precision of the microfabrication and the maturity of the silicon processing, as well as the ability to easily integrate any kind of microelectrode and even electronics on the same chip.

Significant impact on the future of healthcare

MEMS technology has opened the door to a vast number of innovations. Even if only a fraction of its current potential is realized, the positive impact on the future of healthcare is still significant.

If you want to learn more or discuss how we can help to realize your MEMS innovation, don’t hesitate to contact us.

“This is the Champions League in mechatronics” ›
December 16, 2022
“The antenna I designed during my graduation will be used to monitor thousands of patients” ›
November 18, 2022
How can we turn trash into treasure? The architecture drivers for a circular economy ›
November 15, 2022
More news ›
Share on: