Consumer electronics and professional equipment alike become increasingly reliant upon the ability for precise thermal management. As such, thermal control is gaining more attention in the fields of product design and (high) precision engineering. Thermo-electric coolers (TEC) or Peltier elements can be used both for heating and for cooling, making them ideal as thermal actuators. However, due to the nonlinear behavior of Peltier elements, controlling these thermoelectric coolers is not straightforward, see [1].

Therefore, in this study, an Input/Output (IO) linearizing feedback law for Peltier elements is investigated. The added value, compared to other studies on thermal control, is found in the explicit modeling of effects that degrade the control performance when going from an ideal model to a practical test setup, introducing increased performance and larger robustness regimes.

Using the relations for the thermo-electric behavior, a compact, but detailed, TEC model is derived:

In this model SM, RM and KM are the TEC parameters, I is its current and T1 and T2 are the top and bottom temperature of the Peltier element. The top and bottom side are thermally connected to a heat sink, THS, and the point of interest, TPOI, respectively.

Model-based design of a generic IO linearizing feedback puts forth the following control law as an efficient method to control the Peltier element cold-side temperature.

The cold side temperature relates linearly to the new artificial input term u, meaning standard PID control theory can be applied to the thus obtained linear input-output plant, see [2].

The model is further employed to investigate countermeasures for the limitations that arise when implementing the feedback scheme in practice, e.g. modeling mismatches. This yields an adapted IO linearizing feedback law.

Its performance is investigated on a test setup with two Peltier elements that can be controlled individually. The test setup is schematically represented in Figure 1. Test results in which the TECs are following pulsed setpoints are provided in Figure 1 as well. Influenced by the settling time for the pulsed reference, the tracking error can be reduced to acceptable values. 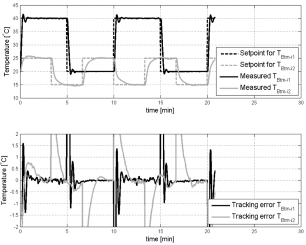 IR-video of bottom plate with sinusoidal references for both Peltiers

Figure 1
Schematical representation of the thermal control test setup with Peltier element (LHS) and temperature evolution of the controlled bottom side temperatures for pulsed references (RHS).

IR-pictures of bottom plate during tests

Further experiments with the thermoelectric cooler show a large region of robustness, meaning the adapted IO linearizing feedback law is very suitable for control of Peltier elements in practical applications.

Both sinusoidal and pulsed references can be followed adequately. Nevertheless, the well-known compromise between settling time and overshoot must be considered in the PI-control law of the IO linearizing feedback. The PI-control law shows to be stable in the entire application range though. 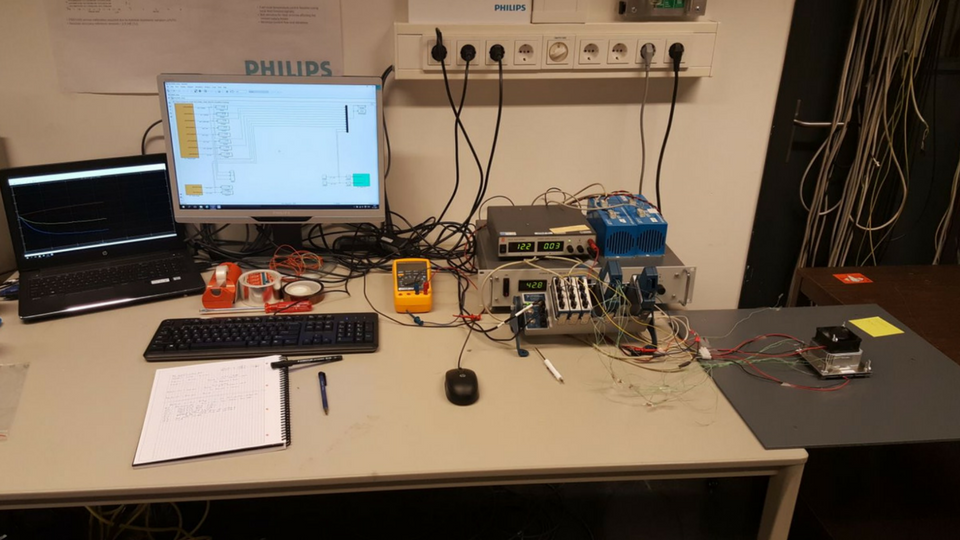