A customer in the semiconductor industry needed a long stroke linear guiding mechanism for their application. A long stroke guiding mechanism in vacuum was created, based on a parallelogram linkage mechanism with cross-flexures. The design has been optimized to meet stringent dynamics requirements (mainly stiffness variation perpendicular to direction of motion) and given constraints on reliability and volume. The mechanism was built and tested on dynamics and lifetime and is currently an important part of the series-produced module.

Design challenge for a linear guiding in a semiconductor vacuum application

For a semiconductor application, a long stroke linear guiding mechanism was needed. This mechanism should function inside a vacuum chamber with high demands on dynamics, outgassing, particle generation and wear. Philips Engineering Solutions was contacted to develop and build the complete mechatronic module.

In the application, given the before mentioned high demands, conventional bearings cannot be used. Design freedom is limited to only the principles of a vacuum feedthrough, magnetic levitation or mechanisms based on flexible elements. All three principles are well known and used at Philips Engineering Solutions, each with their own characteristics. For this semiconductor application, a parallelogram linkage mechanism based on flexures was the best option, with flexures that are suited for extreme large angles (see figure 1).

Flexure stroke and requirements on stiffness and variation thereof

A linear movement of 100 mm was needed. To make this large movement possible within the available space, the rotation of the four flexible hinges was ϕ = ± 8.7° (see figure 2). For infinite lifetime, the stress level may not exceed the fatigue stress of the material at these rather large rotation angles. 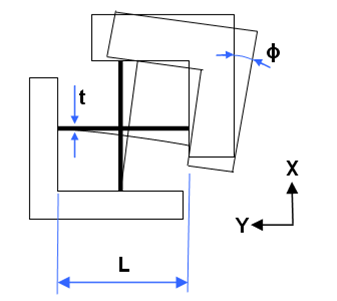 The z-stiffness (I.e., perpendicular to the motion direction) that is felt at the translating mass location (see figure 3) will vary as a function of the rotation angle ϕ, with stiffness being minimal at either of the two extreme angles. The reduction in stiffness as a function of rotation angle causes undesirable z-movement of the gravity loaded translating mass. Besides, the reduction of stiffness limits the dynamic bandwidth of the system. Consequently, the angular flexure stiffness for the two non-rotating directions should be maximized, while additionally the stiffness variation should be minimized.

To minimize the z-stiffness dependence on rotation angle, the dimensioning of the cross-flexures has been optimized. A subset of the variables that describe the cross-flexures (see figure 4) is chosen for optimization by using consecutive FEM calculations. Boundary constraints for the analysis are a desired minimal z-stiffness at maximum rotation angle, and a stress level below the fatigue limit stress within the given geometry and volume claims. 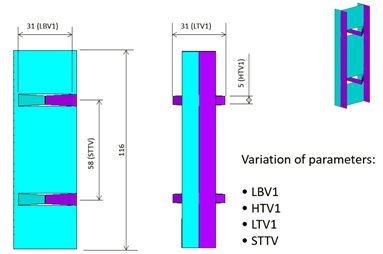 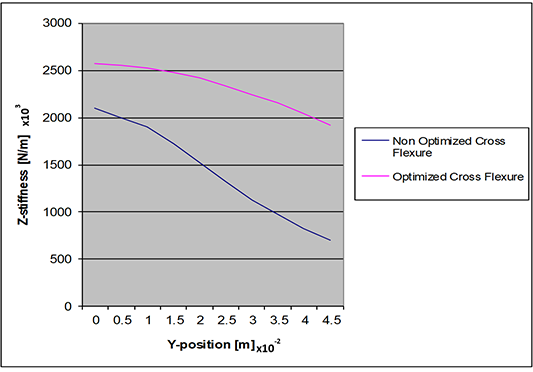 The calculated parameters were used for the final design, successfully verified by dynamic tests. Besides optimization of the geometric parameters of the cross-flexure, also other components of the linkage mechanism were optimized. For the spark-eroded flexures, various materials were tested, and the fatigue behavior was further improved by electro-polishing and shot peening. Final optimization of the complete system was done by implementing a tuned mass damper at the moving mass location.

The linkage system is part of a mechatronic module that in its entirety has been developed and built at Philips Engineering Solutions. After two prototypes of this module, the production was transferred to the series supplier of our customer’s choice. 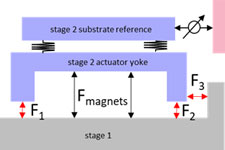 Improving machine performance to serve the future market needs. An example of the development of a precision motion stage with a scanning accuracy of few nanometer. 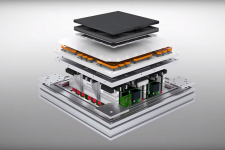 Inverted planar motor with a thin moving sheet. Special to this design is that the moving part consists of a checkerboard of magnets hovering over a base consisting of multiple coils. 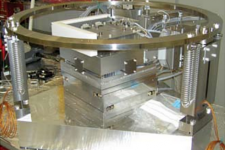 Does our product survive when it drops to the floor? We can predict, measure, and improve the drop and shock robustness of a product. 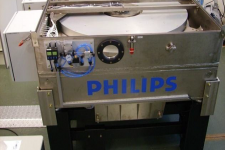 Calibration strategy for a rotary stage

Check out our related services

Check out our high-precision engineering services.

Do you have a question for one of the technical experts of Philips Engineering Solutions? Please send us a message.