Example based on a contribution to Euspen 2016 International Conference

For high-precision motion systems, measurement accuracy is key. Ideally, its position data is linearly dependent on the actual position. In reality nonlinear behavior is present, such as an encoder scale with local scale deformation due to mounting stresses.

The inclination method [S. Kiyono et al. (1994), Precision Eng. 16, 212-218] uses measured integrated differential profiles (groups) as error  shapes. Each group is sampled with a step length L, which is equal to the distance between two probes on the mover (figure 1). The  application of three sensor heads on the same mover allows for a reconstruction of the nonlinearity errors of the encoder on a much denser spatial grid: the spatial resolution is reduces to S, the greatest common divisor of the sensor head intermediate distances (figure 2).

A smart algorithm distils and pre-processes the relevant data from a continuous movement of the mover over the scale. It eliminates the need to step through all calibration grid points. An error profile is then calculated (online but not real-time) and can be used immediately for self-calibration of the system.

The scale errors ?, along with the true stage positions ?, are derived from the encoder measurements ? with a least-squares approximation.

Here, ? is the matrix which links the measurement data with the local scale error and the stage position and contains constraints, build from the geometry of the setup. The scale calibration uncertainty σp can be derived similarly from the (uncorrelated) sensor uncertainty σm:

The estimated scale errors are input for an interpolation algorithm to compute the corrected stage position in between the calibration grid.

An experimental setup with 3 encoder heads is used for verification, see picture. A linear mover on air bearings moves over a vibration-isolated granite table. A polycarbonate cover dampens temperature changes. The test setup allows for reconfiguration of the encoder heads on the mover. 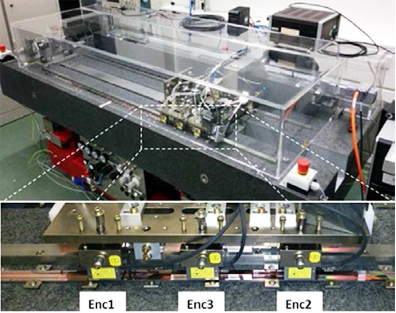 The figure below shows two processed error profiles thatwere obtained on the same setup, but with different configurations of the sensor heads, and for measurements that were 4 months apart. The reconstructed nonlinearity profiles are nearly identical. The period of 58 mm, clearly visible in the reconstructed nonlinearity, corresponds to the pitch of the scale clips.

As such, more encoder heads result in better performance, as long as their intermediate distance is chosen smartly. As an example, the  method is applied here to a linear drive. Trivially, it is also suitable for rotating devices, moreover, it can be extended to multi-DoF devices.