The Austria-based company IMS Nanofabrication chose Philips Engineering Solutions as the partner to build a proof-of-concept system for their electron multi-beam Mask Exposure Tool (eMET). The project was completed in ten months, in a very good atmosphere and within budget.
IMS, founded in 2006, develops nanolithography technologies, e.g. for producing masks required for IC production. The technology is based on electron multi-beam writing, using 256 thousand beams in parallel.

Current technologies for mask-writing are reaching their limits of accuracy and speed. Dimensions of ICs keep going down and although the patterns on the masks are a factor of four larger than the patterns on the wafer, the accuracy requirements are almost as high. The reason is that, with optical lithography, features on the chip are far below the wavelength of the light used (193 nm) and that clever optical tricks are necessary to obtain nanometer resolution.

As for speed, IMS has set as the target that the writing time of a mask must be less than ten hours. The company claims it will meet this requirement with its parallel beam writing. The IC industry is heavily interested in IMS’s concept, as currently there is no other viable technology for the next generation mask-writing with comparable resolution and speed. eMET is also suitable for mask-writing for EUV lithography, the successor of 193nm optical lithography.

Philips was approached by IMS in 2009 to realize the high- precision stage in the eMET proof-of-concept system. The system was to be a mask-writer with full functionality, but with relaxed specs on throughput, uptime and thermal stability.

According to IMS spokesman Christof Klein, Philips was an obvious choice.

“We already had contact with them in 2008 and we were impressed by their expertise and skills in a.o. control engineering, thermal modeling and system dynamics.

At that time we didn’t have the money yet to build the system, but we came back a year later when we had the funding. We agreed with Philips that the stage would be realised within strict budget and time constraints.”

In spite of the stringent requirements (x-, y-position feedback with subnanometer resolution, position accuracy of 1 nm), and technical challenges (like vibration isolation and temperature management) the stage was delivered, as agreed, in ten months time and slightly below budget.

Christof Klein was happy with the collaboration.

“The working atmosphere was very positive during our weekly progress meetings. Philips has not been a cheap partner, but it was worth the investment.” 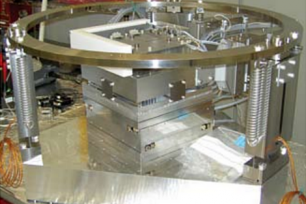